ALL IS NOT WELL IN PARK CITY 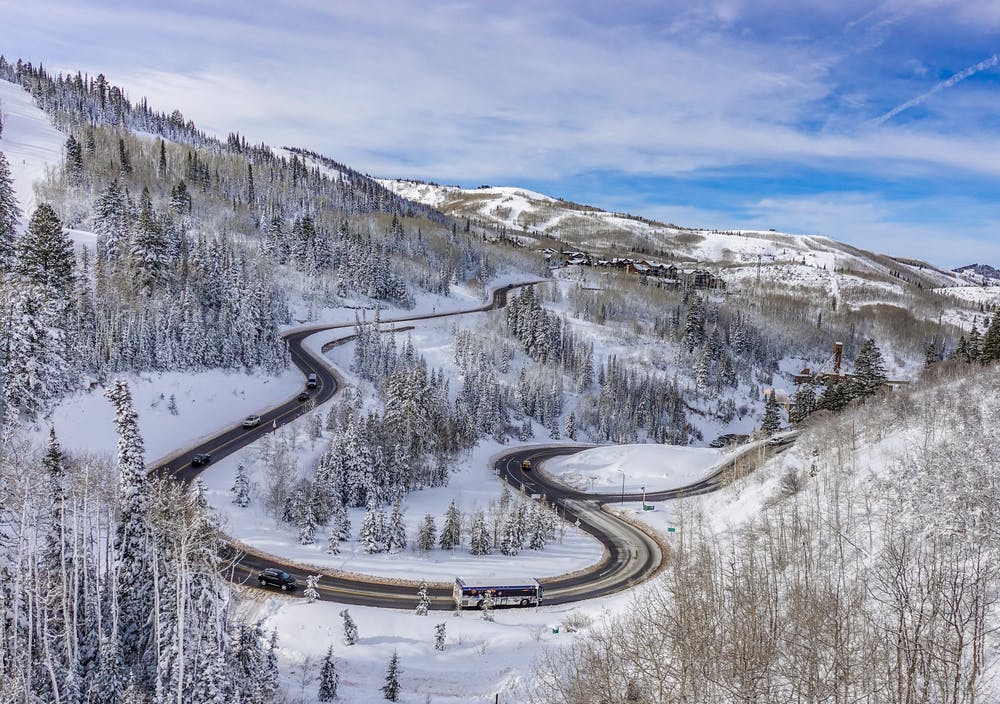 For those of you who know the town and the surrounding region it’s a great spot for winter or summer fun and of course there’s the Sundance Film Festival and the Utah Olympic Park. In SPY DRIVER I chose to make Park City the American home for Formula One champion driver Bryce Winters in the highly-reviewed thriller. As we head into the Thanksgiving and Christmas season, those of you who’ve already taken the book for a ride (or listened on Audible or iTunes) you might remember the significance those holidays played in Bryce’s life there at his moutainside home overlooking the town. As a bit of a teaser and just for the holidays I’m posting the opening from the sequel I’m now very far into. Consider getting, or giving, SPY DRIVER this Christmas. The hardcover might not fit into a stocking but the paperback version sure will. Happy Holidays to all and thank you for stopping by. Now, here’s a look at the much-anticipated sequel.

The scent from the night’s inferno reminded him of his Uncle Pete’s fireplace and of the many campfires Bryce Winters had enjoyed in his younger days back in rural Vermont.  Charred wood always left an unmistakable aroma. As dawn broke over Park City, Utah, Bryce navigated through coals and what was left of torched, massive beams that had formed the cathedral ceiling over his trophy room. This was no redolent, sentimental reverie. This was a nightmare.  “ CIA bastards,” he muttered with disgust.

The sheriff called out to him from what was left of the front entry: the carved grizzly bear on the door that had greeted guests and welcomed him home so many times was now nothing more than a fond memory.

The look Bryce gave the lawman when he turned to respond was enough of an answer. For someone who raced Formula One cars for a living, taking his life in his hands at over two hundred miles per hour, the danger from the smoldering remnants of the now ruined, rustic mountainside home – his retreat – wasn’t a concern.  Finding who did this and making them pay would come next. For now, he wanted—and needed—some space.

“Strange – they didn’t torch the garage,” the sheriff said as he stared at the untouched building across the courtyard from the debris field.  “All the fuel in those cars, it would have been easy.”

Bryce didn’t respond. He just focused his stare at the structure for a moment and nodded.

“I’ll be out of here soon,” Bryce said as he kicked at some of the debris. “I’ve got to head down to Daytona for testing.” He paused as he saw yet another prized possession in the rubble. “I guess this will get me there a bit early.”

Seconds later, a crystal flake drifted gently onto Bryce’s nose and what was left of his mountainside home, his oasis, was now in stark contrast: everything burned black was now frosted with snow. The skiers in the area would the thrilled, but for him this could just as well be karma putting a sheet over the corpse. He had been living a dangerous life on and off the track—it might be closing in on him yet again.

Bryce kicked at more debris with his hiking boots and kept searching. When he finally did find what he was looking for, his reaction told the sheriff that he should get back in his patrol car and drive away. Bryce knelt, brushing away soot and ash with his hand before picking up what had been, until today, his most prized possession—his Formula One World Championship trophy.

He grabbed the once magnificent symbol of ultimate racing success by one of its handles and lifted it. He pulled it close, inspecting the mark a bullet had left on it less than two months ago. Suddenly the handle snapped off and the partially melted cup fell back into the rubble with a thud. Bryce looked around and focused on the only thing other than his gun safe and fireplaces that had somehow survived the blaze: one windowpane overlooking the valley.

He threw the severed handle at it, smashing it to bits.

“Got that out of my system,” he said to himself. “Now, let’s go find the assholes who did this and return the favor.”

He turned to look one last time at what was left of his home. He recalled the night his kitchen was shot up by a renegade CIA agent in a botched kidnapping. He thought of the Thanksgiving weekend he’d spent there with his Uncle Pete before he passed….

Then, something caught his eye: movement in the trees, up on the hill across the road from his gated property. It wasn’t a moose this time.

The police had cleared the street of television trucks, reporters, and the curious who had assembled to see the spectacle, but the few photographers that remained were perched on the slope above, recording his every move. Someone else, dressed in black from head to toe and hidden in the trees another fifty feet up the hillside, was also watching.

The photographers had no idea whom they were really hounding. Bryce wasn’t just a champion race car driver—he was a CIA-trained hit man. Taking a life was all in a day’s work—under the fitting codename “Deadly Driver.”

He took a few long, slow breaths of crisp mountain air to calm his rage, clear his head, but the charred wood smell and the moist snow brought him back.

He wouldn’t consider asking the CIA, or the FBI for that matter, for help in tracking the arsonist.  There wasn’t anyone at either agency he could trust—not with his life. He’d done work for England’s MI6 but didn’t trust anyone there now either – he couldn’t. He stood quietly in the rubble and then looked to the four car garage that stood across the stone courtyard from his once majestic home. He walked to it, waving at the few paparazzi who had come down off the hillside and were shouting questions as their cameras lit up the area as if it were a Hollywood movie premiere.

“Who did this Bryce,” one yelled. “Any chance Tony Bishop’s sent you a holiday card?” called out another. Bishop, his racing nemesis, had been at odds with Bryce their entire racing career. “Piss someone off Bryce – maybe someone’s husband?” shouted another. They were trying to get under his skin. Bryce stopped in mid stride half way to the garage and smiled.

“Merry Christmas, Happy Holidays, and go F yourself,” Bryce called out through a broad smile. Once at the side door and out of view of the bothersome bastards Bryce but his lip and walked back out into the view of the crowd.

“That last one was for Tony Bishop, wherever in the world he is tonight, and to whoever did this,” Bryce said in a milder tone. “And for your information, I’m driving through that gate in three minutes. If you’re in the way, I might skid on the ice and accidentally run a few of you buggers over so be advised.” Bryce laughed as he watched the photographers study the dry stonework under their feet. He tapped the entry code into the touchpad on the wall and reached for the door handle to the sound of the locking bolts releasing. He stopped just short of it. He looked back to the rubble and remembered what the sheriff had said. Yea, it is strange the asshole didn’t burn this too. I wonder if anyone checked inside. He cleared his throat and turned the knob.

Soon he was inside the temperature controlled garage, set to a mild sixty degrees. He pushed the door closed behind him and threw the bolt. He took a deep breath and rested his head against the door. Slowly turned toward the vehicles, tears in his eyes. He took a few deep breaths and then stared at the vehicle closest to him. It was his late Uncle Pete’s ten year old four wheel drive Toyota Tacoma pickup, empty rifle rack still in place at the rear window. He walked to the front of the pickup and glanced at the white on green Vermont license. “Glad I didn’t waste the effort getting Utah plates. It might be time for me to call someplace else home,” he said softly.

Bryce placed both hands on the front fender.

“I really miss you Pete. Wish you were here, now.” He shook his head and let out a laugh. “You old bastard.”

He walked past the pickup to the heavily performance-modified black Subaru WRX sedan he’d acquired back in New England and driven cross country.

“Not tonight,” he said fondly. He continued to the next ride, the brand new vibrant red Mercedes AMG coupe the manufacturer had shipped to him from Germany. As he raced one they felt he should also play in one.

“Nein,” he whispered in one of the four languages he’d learned in recent years.

Then he walked to the fourth vehicle and nodded with approval. He climbed behind the wheel of his two year old black Chevy Tahoe Z71. With heavily tinted windows it had always blended in well in Park City with the Land Rovers and Mercedes SUVs driven by the town’s countless celebrities – especially during the holiday weekends when the film festival or the ski slopes had drawn them there. He pushed the start button and smiled as the modified V8 engine came to life and the custom exhaust gave off a distinctive purr.  He checked the center console, a black semi-automatic pistol and three spare magazines at the ready. He looked to the overhead console and tapped the garage door opener, the gate opener, and then tapped the horn twice. He sped from the garage and through the now open gate as if he’d just come in for a pit stop and was now gone. As the photographers ran for their cars a sheriff’s deputy quickly blocked the small road with his Dodge prowler.  An hour later Bryce was parked in front of the five star Grand American Hotel in downtown Salt Lake City, the intermittent wipers streaking the light snow that had begun to fall. He was alone and it was Christmas.

Only days before, Winters had been in a much friendlier environment. Lying on one of Ibiza’s beautiful beaches after concluding four days of F1 racing practice at the Catalunya Circuit in Spain, he had much to appreciate: the anonymity, the ideal weather, warm Mediterranean waters, and a beautiful Spanish blonde he’d met days earlier.  Testing had gone better than expected and he was looking forward to the coming season. His hand, badly injured during the murder attempt in Park City months before, bore scars but was functioning perfectly as he brought a cold beer to his lips…then…something entered his peripheral vision: she was headed for the turquoise water.

SPY DRIVER is available around the world where thrillers are sold. To order a hardcover, Kindle, Audible, or paperback format on Amazon click here. Buckle up and be safe out there! JK