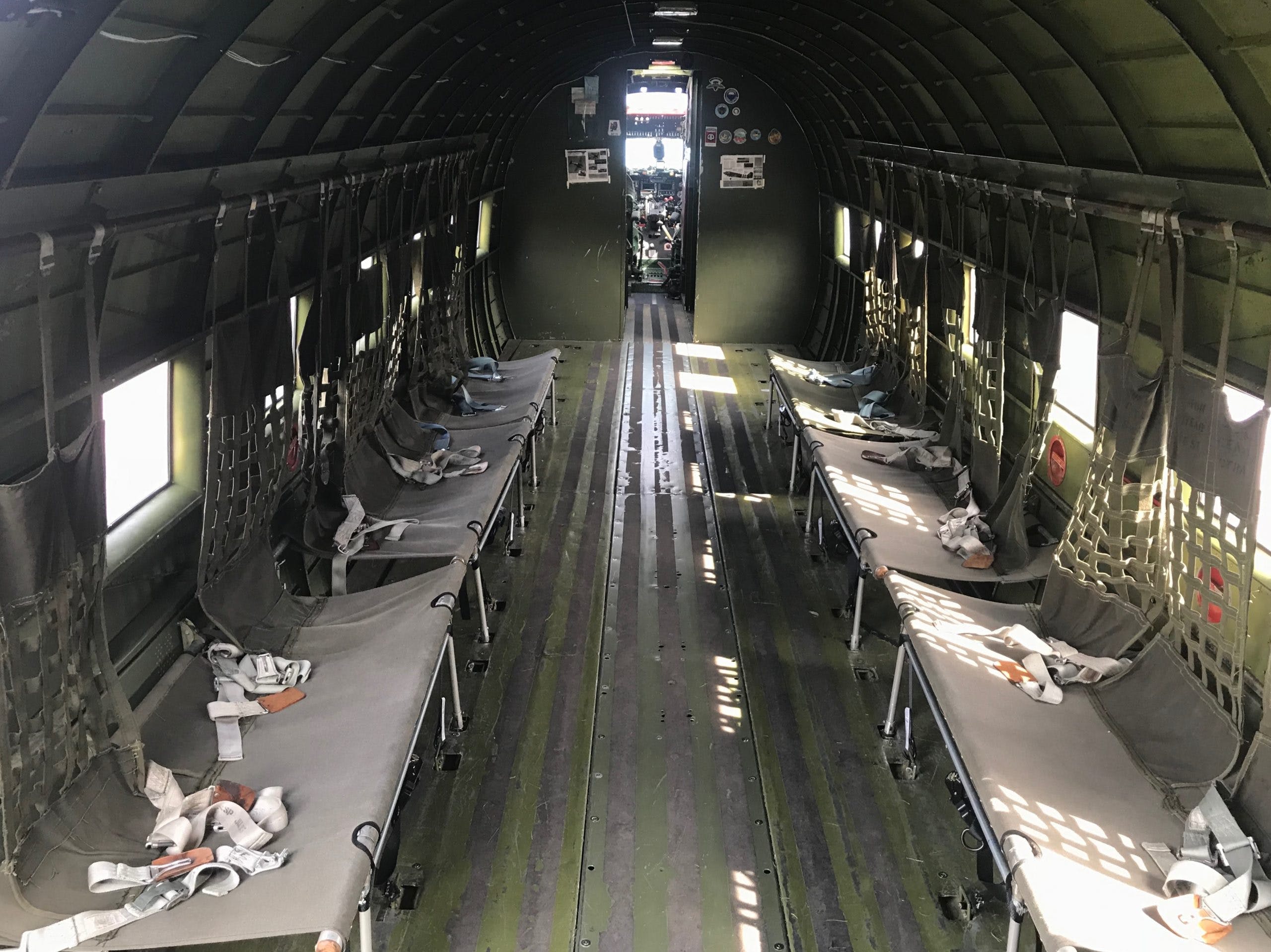 I’ve always had great respect and admiration for our Armed Forces veterans, particularly those who fought in World War II. My father saw action in Europe with the U.S. Army but when he came home like so many others he put that behind him as best they could and got back to work as part of what Tom Brokaw called The Greatest Generation. As with any armed conflict, there are many stories of bravery and heroism but there is also the great unknown. At the American Cemetery overlooking Omaha Beach in France, there is a wall – a very large wall – bearing the names of those brave souls who were never found, never buried. That, my love of warbirds and their stories, and a “What if?” mindset about time travel led me to write the following and subsequent related scenes in one of my earliest yet little-known releases, THE LOST PULSE.

For an Independence Day speech the President was to give at a World War II Warbird museum event in Virginia, he asked Jackson and Emma to accompany him. As the three military helicopters circled the field, two being decoys and the third carrying the President and his party, Stewart sat forward in his seat to peer out the windows of Marine One and urged his guests to do the same.

“Look at those beautiful birds,” he exclaimed. A few thousand feet beneath them, the restored Memphis Belle B-17 bomber and the Whiskey 7, a C-47 military transport plane, heroes of the past, sat parked on either side of the podium where he would deliver his address.

“We’ve come a long way since then,” Jackson said. “B-52s, and drones and B-2 stealth bombers, but those men that flew missions in them, and jumped out of those C-47s, were some bad-asses.”

Stewart nodded as he kept his eyes on the planes.

“It’s one thing to operate a joystick from five thousand miles away and drop bombs but it was a whole other thing to jump out of the Whiskey 7 over Normandy on D-Day. Those men jumped from low altitude into the night sky, with Germans spread out across the countryside below them.” Stewart paused. “Our fighting men and women are the best of the best, but I still have to admire and be amazed at the stories that came from that night.”

Jackson was ready to continue the conversation but he noticed tears had filled Stewart’s eyes. He decided to let the moment be and wait for the landing to take place so they could get up and get moving.

Emma had noticed the tears as well. Her family was from the UK and had endured the bombings and threats from Hitler’s Germany. She remembered the stories her grandfather had told of how frightening it was for an entire country to expect to be bombed every night during the war.

Once the helicopter landed it was time for Stewart to greet the crowd and make his way to the podium. Agent Hill had been riding with them and began to lead the President directly to the stage. But, as Stewart shook hands and stopped to pose for a picture every ten feet or so, Hill noticed Stewart was pointing at something.

“Grizzly wants to go over to the plane,” Hill spoke into his wrist-mounted microphone. Grizzly was the Secret Service’s code name for this President and with good cause. Stewart carried a presence that showed confidence and capability and he knew it. He was a warrior himself having spent a lifetime in the Marines. Nobody wanted to get in the crosshairs of this man.

Both planes had been open to the public until two hours before Marine One was scheduled to land. Once they were cleared, the areas were cordoned off and the Secret Service’s advance team re-inspected them again for people and weapons. The machine guns that were mounted in the nose, tail, belly, top, and side gun ports had been inspected. With the firing mechanisms disabled, they could render no harm but a walk-through with a bomb-detection dog as Marine One came into view confirmed these warbirds would pose no threat.

Hill had expected Stewart would bypass the podium area and head straight for the Memphis Belle but instead, he walked directly to the rear, pilot’s side, of the Whiskey 7. He turned and waved to the crowd, gestured for Hill, Jackson, and Emma to wait for him outside, and then stepped onto the aluminum stairs that led into the aircraft. Hill followed him to the doorway but waited and watched as the President took a seat on the pilot’s side of the plane. During missions, up to twenty-eight paratroopers would sit down on either side of the plane, flying to their missions, waiting for the red jump light at the doorway to change to green for go.

Patriotic music was being played over the facility’s loudspeaker system while Stewart sat quietly with his thoughts. Hill watched as the President slowly inspected the plane. The walls were painted a drab military green with not a shred of sound or temperature insulation to be seen. This was the most bare-bones personnel aircraft he had ever seen.

“Sir,” Hill said. “You okay, Mr. President?” Stewart took a deep breath, stood up, and took three steps toward the doorway. “Can you imagine jumping out of this door in the middle of the night in the dark and floating down into harm’s way?”

“I’ve seen all the movies, Mr. President, but no, for most of the young men who went through these doors, I can’t imagine what they were feeling.”

“I’ve never been inside one of these before. I’m glad I came aboard. Now let’s do this speech. Then I want to go home. That’s more than so many of them would live to do.”

Stepping back down onto the ground Stewart gave the crowd a big wave and then followed Hill to the podium and delivered a powerful speech carried live on CNN and other networks. When it was over, he spent a great deal of time shaking hands and exchanging greetings with well-wishers. An hour later, Marine One was back at the White House but Stewart’s mood had turned somber.

At his request, Emma got dinner started in the residence kitchen while Jackson poured them both a beer and sat down in the massive living room. They sat quietly for a time, listening to their Scottish cook as she spoke to herself while she prepared the cheeseburgers, hot dogs, and potato salad that had been requested.

Normally the three television screens would have been turned on, but Jackson sensed the President wanted to talk instead.

After nearly five minutes, Stewart began to tell a story.

“JJ, I know you’ve never heard this before because I have never discussed it with anyone other than my mother. World War II touched everyone who was alive back then in one way or another, but for her something happened that crushed her soul and took her from me long before she ever died. I’ll give you the short version.”

Jackson put his beer down on the coffee table and sat forward on the chair. Stewart went on to tell how his uncle, his mother’s only brother, had been a young paratrooper during that war and was stationed in England prior to the Allied invasion of Normandy in June of 1944. He was on one of those C-47s that took off for France that night, but he never came home. The worst of it was that he was never found. Word coming back from the men he flew with that night was that he chickened out and never jumped. He was the last man in the line. He let all of them go out that door into the night but stayed aboard.

“So, when they landed back in England he was probably arrested?” Jackson suggested.

Jackson sat back in his chair. “And your mother?”

Stewart shook his head slowly. “She couldn’t bear to think she had lost her baby brother. Worse yet, the thought that he had been yellow and didn’t jump.” Stewart’s expression changed from sadness to anger. “It broke her heart and her mind, and depression whittled away at her spirit until there wasn’t much left.”

Jackson was amazed that he had never heard this story. Not from Stewart or Elizabeth.

“That’s one of the million reasons Elizabeth and I took you in when you were lost. I had lived a bit of your journey myself and wasn’t ever going to let anyone else feel that alone ever again if I could help it.”

Emma called out that the dinner was now ready and as the two men walked into the kitchen, Jackson’s mind was already fast at work.

Curious? Follow the story and find out what really happened that night over Normandy when Jackson takes Stewart literally back in time to an airfield in England in June of 1944. Just one of many adventures, some intriguing, some heartbreaking, in THE LOST PULSE. Three thrillers later and while searching for the right home for THE BLOOD COMPASS I’m developing another project. This time a family will be forced to come to terms with a very difficult situation and featuring a B-25 as the backdrop for a modern-day adventure.